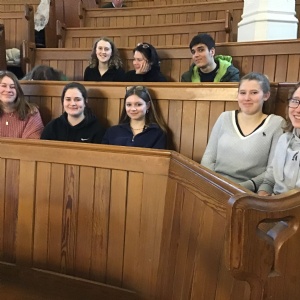 Recently our Years 12 and 13 Classicists attended a series of lectures in Bloomsbury Baptist Church, London delivered by world-class experts on the World of the Hero in Homer and Virgil.

The lecturers included Prof. Richard Jenkyns, who gave a survey of religion in Virgilian and Homeric Epic, Prof. Paul Cartledge, who considered the reason behind Virgil’s visit to Augustus, which left him fatally ill, Dr. Helen Eastman, who dipped into the vast world of Homeric allusions, and Prof. Edith Hall, who illuminated some of the stark contrasts between the heroes Achilles, Odysseus and Aeneas.

The students found the lectures enriching and challenging: they gained further insight into the world of gods and heroes and enjoyed engaging with some of the many puzzles and nuances of the epic poems.