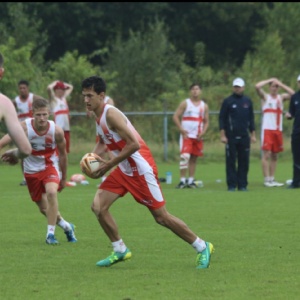 A student from the Stephen Perse 6th Form is set to play for England in a European Touch Rugby tournament.

Touch rugby was first developed in the 1950s and was used as a training technique in rugby league. It is now a recognised sport. Rather than tackling their opponents, players touch the body, clothing or ball.

Kolia  will be travelling to Dublin in August to compete in the European Junior Touch Championships, playing in the England U18s Boy's team.

The 17-year-old, who is studying Maths, Physics and Geography A Levels, first got involved in Touch Rugby just three years ago at a local level in Cambridge. He has previously competed in the England U18 Boy's Team in the European Junior Touch Championships, winning that tournament last year.

"Representing England in a tournament means that you have to do your best on the field and behave in an exemplary manner. It is a great experience as you meet the best players in the country and play at an elite level. I like the fast pace, the skill and tactical aspects of the game, plus the fact it is a team sport."

Kolia, who is originally from Australia, trains once a week and travels around the country on weekends to compete and says playing sport breaks up the school routine.

His successes in touch rugby do not end at this Junior tournament - he has also been invited to join a men's open squad, in Edinburgh early July, where he will be playing the top men's sides from Ireland, Wales, Scotland and France.

Kolia said: "This is physically and technically a big step up - I am looking forward to the challenge!"